Planning Ahead to Support the Next Generation

‘Ōhi‘a Lehua Rainforest Born Among Hawaiian Volcanoes, Evolved in Isolation is Dr. Dieter Mueller-Dombois' latest book. MORE
Prof. Mueller-Dombois has contributed to our knowledge of Hawai‘i and the Pacific in profound and diverse ways. All of us who work in ecology, conservation, and/or resource management owe him a great deal; his work has been the foundation for much of what we have done. Even since his retirement more than 20 years ago he has continued to push himself and all of us into new areas of research and new ways of thinking.

UH Mānoa Emeritus Professor Dieter Mueller-Dombois has studied the ‘ōhi‘a forests of Hawai‘i for fifty years and, with his colleagues, was the first to identify ‘ōhi‘a forest dieback as not an outcome of pathogens or invasive species but a natural life cycle event of cohorts of trees that germinate, grow up, and die together on the same substrate. Their demise makes way for the next generation. This observation has received global recognition.
.
He counts both, this paradigm shift regarding forest diebacks and his graduate students, as his greatest professional accomplishments. He advised 18 students on their PhD dissertations and 17 on their MSc theses as well as 5 on their post-doctoral fellowships. Many of these scientists are leaders in the environmental ecology field today. He credits his success, in part, to imagination. "You have to think beyond factual relationships and have imagination to identify what is really interesting and then ask questions." The questions then can be developed into appropriate research hypotheses.

Born and raised in Germany, he knew as young as seven years old that he wanted to be a forester like his uncle. Before he could pursue that dream, he experienced the nightmare of WWII as a 17-year-old drafted into the German army. "When the war was over, I knew I would never go through anything as terrible as that again in my life." (You can find an account of Dieter's war experiences at http://bills-bunker.de/81301.html.)


"Aging is not a disease. It is the ultimate predisposition to completing a life cycle. Growing old is a challenge. It takes courage, self-discipline, and a sustained love of life with resilience to complete one's own life cycle." 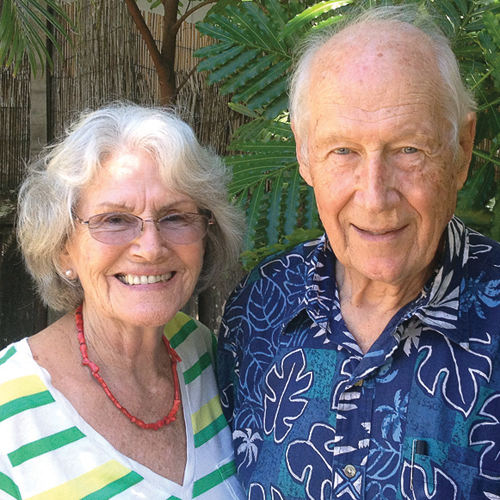 After the war, he immigrated to Canada where he eventually earned a PhD in Forest Ecology from the University of British Columbia and then completed a research task involving forest land classification in southeastern Manitoba, while stationed as a Forest Research Officer in Winnipeg.

"Prof. Mueller-Dombois has contributed to our knowledge of Hawai'i and the Pacific in profound and diverse ways. All of us who work in ecology, conservation, and/or resource management owe him a great deal; his work has been the foundation for much of what we have done. Even since his retirement more than 20 years ago he has continued to push himself and all of us into new areas of research and new ways of thinking."


When considering a bequest...

Annette Mueller-Dombois has these suggestions for anyone considering a planned gift to the University of Hawai‘i Foundation:

In 1963 he accepted a faculty position at the University of Hawai‘i. "I was interested in teaching introduction to botany, but I was scared because I had never taught on tropical plants. It was a challenge." Three years later, on a leave of absence, the Smithsonian gave him an opportunity to study the flora and aspects relating to the ecology of vegetation and elephants in Sri Lanka. When he returned to UH in 1969, he had additional material for his college classes and would successfully institute a world-class plant ecology program during his tenure. Today, he is considered the foremost vegetation ecologist in the Pacific.

His wife, Annette, is a teacher who comes from Germany as well. This is a second marriage for them both. They have seven children between them from their first marriages and many, many grandchildren and great-grandchildren. Annette is a committed partner in her husband's endeavors. In his latest book, Dieter acknowledges her "sustained and most valuable assistance."

Together, they have made a bequest to the University of Hawai‘i. The Dieter and Annette Mueller-Dombois Endowed Fellowship will be established from a portion of their estate. As stated in the gift agreement, this fellowship will fund "graduate or post-doctoral research at the University of Hawai‘i at Mānoa College of Natural Sciences, Department of Botany in the area of island ecosystems and vegetation ecology."

As Dieter explains, "The hope is that people will further work along the lines of biodiversity understanding particularly conservation ecology and ecosystem services with a focus on native resilience." What is the resiliency of native populations — in humans as well as plants and animals? What are the innate factors that different species and cultures contain that can help re-establish and maintain sustainable ecosystems? He also hopes that natural and social scientists will work together with others, sharing their findings to further the knowledge of all.

Having studied the life cycles of ‘ōhi‘a forests for decades, Dieter and his wife Annette are well aware of their own. As Dieter observes, "Aging is not a disease. It is the ultimate predisposition to completing a life cycle. Growing old is a challenge. It takes courage, self-discipline, and a sustained love of life with resilience to complete one's own life cycle." With this attitude, Dieter and Annette have chosen to provide for the generations to follow.

In the dedication of the April 2012 issue of Pacific Science, Peter Vitousek and Donald Drake hoped that the papers in the journal would "inspire others to study what Prof. Mueller-Dombois has accomplished, and to follow their own interests and convictions with the passion that he has displayed through his long and productive life."

May this fellowship accomplish the same end.

‘Ōhi‘a Lehua Rainforest Born Among Hawaiian Volcanoes, Evolved in Isolation is Dr. Dieter Mueller-Dombois' latest book. Published this year, it was written in collaboration with Jim Jacobi, Hans Juergen Boehmer, and Jonathan Price with a preface by Sam Gon. 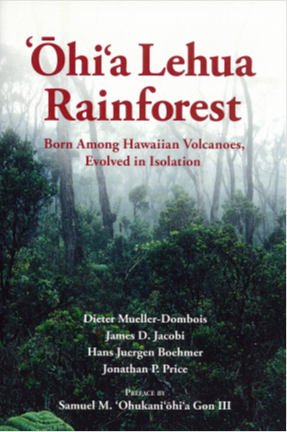 The book's back cover reads:

"In the early 1970s, a multidisciplinary team of forest biologists began a study of Hawaiian ecosystems under the International Biological Program (IBP). Research focus was on the intact native ecosystems in and around Hawai‘i Volcanoes National Park, in particular the ‘ōhi‘a lehua rainforest. Patches of dead ‘ōhi‘a stands had been reported from the windward slopes of Mauna Loa and Mauna Kea. Subsequent air photo analyses by a team of US and Hawai‘i State foresters discovered rapidly spreading ‘ōhi‘a dieback, also called ‘ōhi‘a forest decline. A killer disease was suspected to destroy the Hawaiian rain forest in the next 15-25 years. Ecological research continued with a focus on the dynamics of the Hawaiian rainforest. This book explains what really happened and why the ‘ōhi‘a rainforest survived intact as everyone can witness today."

Stanford Ecologist Peter Vitousek describes the book "in part a guide to and explanation of what you see in Hawai‘i Volcanoes National Park, in part a fascinating story of a rich career spent in Hawaiian forests, and in part an accessible and engaging discussion of the science of ecology. I recommend it for travelers and scientists alike.