Philanthropist, former UH Foundation trustee, successful lawyer and global citizen Frank Boas will be remembered as one of the University of Hawai'i's most ardent supporters. Through his philanthropic legacy that includes generous estate gifts, his life will be honored for generations to come.

Frank was a truly extraordinary man. We are most grateful to him for the lasting impact he will make through his generosity.


"I strongly believe that this University is Hawaii's principal resource for creating intellectual capital, the driving force for Hawai'i's and the world's economy in the 21st century." 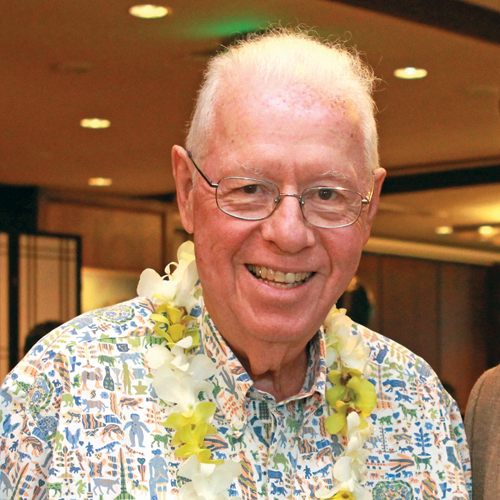 Frank was born in the Netherlands in 1930 and immigrated to the United States with his parents when he was 11 years old. He graduated with his undergraduate and law degrees from Harvard University. After Harvard and service in the U.S. Army, Frank served as an advisor to the State Department and opened a successful international business law practice in Belgium. He retired to Hawai'i in the late 1980s and was extraordinarily active in a wide range of educational, community, art, and international efforts. Frank's philanthropic impact at UH includes:

From an Interview with Frank Boas

After a successful career as an international lawyer, Frank Boas decided to retire and move to Hawai'i in 1988. After retiring from the practice of law, Frank is stayed as busy as ever working to improve the future of Hawai'i.

"I was living in Brussels, visiting Hawai'i regularly as an attorney for Dole Pineapple, to set up their European operation. I have always been interested in Asia, and I realized that Hawai`i would be one of the best places in the world to pursue my interest in international education during retirement.

After living in Hawai'i for several years, I began thinking about supporting the University of Hawai'i. I strongly believe that this University is Hawaii's principal resource for creating intellectual capital, the driving force for Hawaii's and the world's economy in the 21st century. The University of Hawai'i has a strong international focus; there are more Asian scholars among its faculty than in any other university in the U.S.

I found an ideal way, through the University of Hawai'i Foundation, to make gifts to support the Pacific-Asian Legal Studies (PALS) program at the William S. Richardson School of Law, while also receiving a life-income. It's called a charitable gift annuity. I contributed stock that had grown in value, but was not providing much income, in exchange for fixed annual payments, paid to me quarterly for the rest of my life. I avoided the immediate capital gains tax I would have paid had I sold the stock, and I received a nice tax deduction in the year of the gift. In addition, some of the income I receive is tax free, at least for the duration of my life expectancy."

In addition to supporting PALS, Frank also helped to establish the International LLM program at the Law School, as well as the Frank Boas Visiting Professorship from Harvard Law School.

"When I pass away, the Foundation will establish an endowment with the remaining annuity principal. Income earned by that endowment will support the PALS program in perpetuity, as well as the International LLM program and the Boas Visiting Professorship. In the meantime, I am using some of the income I receive to make annual gifts to these programs. You can give cash, stock, and even real estate. There are many programs at the University's ten campuses state-wide that can be supported in this way. A charitable gift annuity is truly a gift which, in addition to benefiting the donor, also benefits the entire community by providing private support to the University of Hawai'i.

Planned giving provides one way that each of us can give. Sometimes there is more than one way. I think this upcoming campaign is important to Hawaii's future and I am grateful that there are so many different ways of private giving which strengthen the University of Hawai'i."

Frank's giving through careful estate planning has resulted in one of the largest individual commitments to the University's Campaign for Hawai'i.