A Gift for Languages and Support for Family

After 42 years of teaching French Polynesian and Balinese languages at UH Mãnoa and across the globe, Jack Haven Ward decided it was time to spend more time with his wife Ethel and family and officially retired in 2010. Though retired, he continued to teach his classes "manuahi" (for free) until Spring of 2012. And now, through philanthropy, his love and commitment to instruction is a legacy that will live on forever through the Jack Haven Ward Graduate Scholarship in Indo-Pacific Languages.

Working with the UH Foundation to commemorate his retirement, Jack made both an immediate gift to launch the scholarship fund and a deferred gift through a charitable gift annuity agreement with UHF for his wife Ethel to grow the fund. Regarding his deferred gift plan Jack says "I chose to add to the gift with a gift annuity agreement because it not only adds to impact of the endowment but gives my wife Ethel the security of increased retirement income with great tax benefits for us today."


"My goal is to perpetuate instruction at UH Manoa in Tahitian and other Polynesian languages of French Polynesia and in Balinese and enable graduate students with serious professional involvement in the study of the communities where these languages are spoken to continue their studies." - Jack Ward 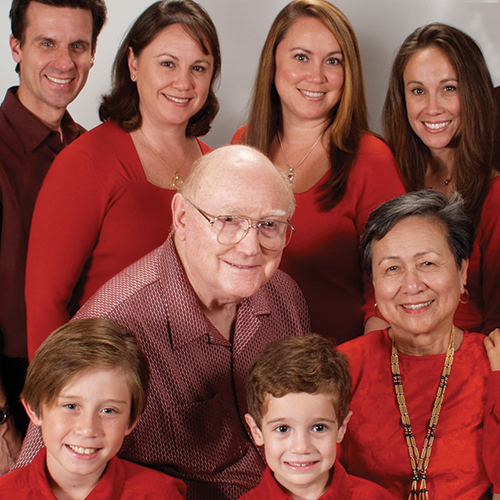 Jack was born in Topeka, Kansas in 1929 and was educated there through high school. His undergraduate education was at the University of Kansas and Yale University. His love and exploration of the wider world began in 1951 with service in the U.S. Navy and the Korean War. The Navy brought him to Hawaii and it became "home."

Jack's long association with the University of Hawai'i at Mãnoa ("UHM") began when he obtained his Master of Arts degree from UHM in Pacific Anthropology, followed by his PhD from Cornell University in General Linguistics and Southeast Asian studies. With his MA thesis and PHD dissertation he began his lifetime focus on Polynesian and Austronesian languages and travel in French Polynesia and Asia. In addition to UHM, Jack has held teaching positions in the Philippines, Japan, and Cornell University.

During Jack's tenure as UHM faculty he taught the languages of Tahiti, Hawai'i, and Bali and gave instruction to special students in Marquesan, Tuamotuan, Mangarevan and Rapan. He also served as an Adjunct Professor at the Université de la Polynésie Française ("UPF") in Tahiti teaching Hawaiian to students in the Reo Ma'ohi Program. He was responsible for the establishment of the Tahitian Language Program at UHM and was instrumental in setting up and maintaining the exchange agreement between UHM and UPF. He also headed the committee that established the Hawaiian Studies major at UHM and served as the first director of the Hawaiian Studies Program.

More than a classroom scholar, Jack's community service has included establishing and serving as board member of Iaorana Tahiti, an organization serving the greater Tahitian community in Hawai'i. He is a life-long Episcopalian and has served his church as a Lay Reader and Eucharistic Minister for decades at St. John's by the Sea in Kahalu'u, O'ahu. He retired from the US Navy with the rank of Commander. His love of the sea includes extensive experience on private sailing voyages in the Pacific on which he served variously as mate, navigator and skipper.

With his gifts to create an endowment that supports study of Polynesian and Balinese languages at UH Mãnoa, Jack Ward has not only ensured continued study of the languages he so loves, but will leave a legacy his family can be proud of and future UH students can benefit from forever.

From an interview with Jack Ward

Please tell us how UH helped shape your career
My link to the University of Hawai'i goes back to 1952 when the U.S. Navy brought me through the Pacific to Hawai'i. In 1955 I entered UH as an institution well situated to give me helpful perspectives on my prior military and civilian experiences, specifically to learn about Hawai'i, the Pacific and Asia. With encouragement from my professors, especially the Anthropology faculty [Samuel Elbert, Katharine Luomala, Leonard Mason], I decided to pursue my master's degree in Pacific Anthropology with a focus on language and linguistics.

Why do you choose to support UH?
I was well served by my UH experiences which led to a doctorate from Cornell in Linguistics and Southeast Asian Studies. In fact, I was so happy with my time in Hawai'i that I eventually returned here to contribute to our own UH programs so that other students might benefit as I had. I was fortunate enough here at UH Mãnoa to be able to innovate new courses, i.e., the Tahitian Language/French Polynesia and Balinese foci. After giving over 40 years of my life to these efforts I want to help ensure their continued growth. My scholarship will enable students to study in these areas and indirectly lend support to these programs.

Why did you choose to support UH through a deferred gift life income arrangement?
My scholarship grants are both direct/outright gifts that enable me to see the impact of the scholarship immediately. The deferred income gift serves as a source of income for my wife during her lifetime and eventually to add to the longer term funding for student support.