For our university, our hawaiʻi,
our future

With planned giving, you can provide long-lasting support for
the University of Hawaiʻi and its students while enjoying financial benefits.

Opening up a sky of possibilities 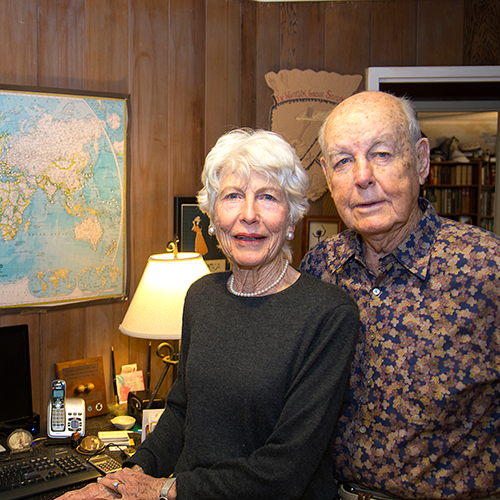 A world map mounted on the wall of their Kailua home shows that Randy and Jean Jaycox love to travel. Dozens of white pins point out the cities and countries they've visited over the years, from Denver to Mongolia, Honduras, Guam, Hokkaido, Petra and beyond. A retired Navy carrier pilot and former United Airlines flight attendant, Randy and Jean Jaycox have a shared passion for aeronautics and aviation that has taken them to faraway places many people still dream of seeing.


"We want to promote science, technology, engineering and math (STEM) education, and we thought Windward was a great place to do it," said Randy Jaycox. "We believe strongly that education is the key for people to go places and do things."
"I always knew I wanted to fly," said Randy Jaycox. "I had two goals. The first was to get my wings, and the second was to marry someone who savors travel and is ready to see the world."

Jean Jaycox can trace her interest in flying back to the sixth grade when her history class learned about Timbuktu.

"Our class had been reading about Africa and I remember saying to myself, 'I'm going to go there some day.' And that was it! Even way back then I knew that's what I wanted," she said. Jean Jaycox went on to work as a flight attendant shortly after meeting her husband and even has 11 hours of pilot time under her belt.

For the Jaycoxes, the sky is a pathway to infinite possibilities. Fueled by their shared love of aeronautics and continued commitment to higher education, Randy and Jean Jaycox are generously supporting the Center for Aerospace Education at Windward Community College through a charitable gift annuity, in hopes of educating and inspiring young minds towards future achievements.

Through their support, the Jaycoxes hope to encourage students interested in aerospace and other related fields to never stop pursuing their goals.

Said Randy Jaycox, "Sometimes when people hear about all the places we've traveled to, they say, 'I wish I could do that' or 'I wish I could go there'. And the truth is you can. With the right resources, you can go anywhere."