A Series of Unexpected Opportunities

Dr. Ricardo Trimillos didn't plan to focus his research on the music of a Muslim community in the southern Philippines. He played the koto, a stringed instrument from Japan, and that's where his interests resided. When a group of friends planned a research trip to the Philippines, he agreed to go along, and spent the rest of his career sharing his expertise in Filipino culture and music.

Neither had he planned to earn his master's degree at UH Mānoa. When he graduated with a bachelor's degree in piano from San Jose State College, the East-West Center had just been established and was recruiting graduate students. He interviewed for a fellowship and was accepted.

After earning his doctorate at UCLA in ethnomusicology, he hadn't expected to join the faculty at Mānoa, but he says, "I was passing through on my way to the Philippines and they offered me a job, and I knew this is where I wanted to be. I never thought of UH as a stepping stone: it was clear to me because of Hawai'i's culture and lifestyle that I was going to stay."

He served for 43 years in multiple leadership positions, including president of the East-West Center Association, vice president for the Society of Ethnomusicology, and chair both of the Music Department and of Asian studies at UHM's School of Pacific & Asian Studies. 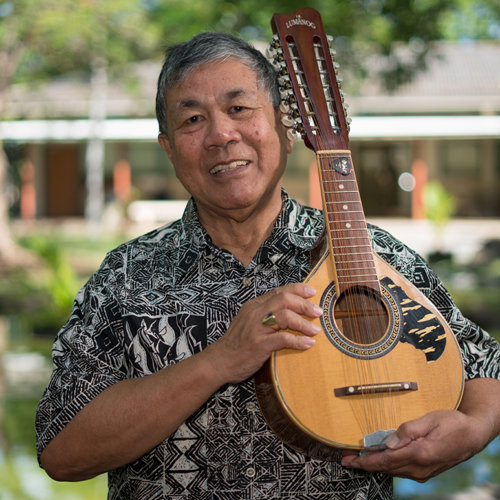 Now in his retirement, he doesn't want to leave things to serendipity. Trimillos spoke to his financial advisor, who suggested a gift to the university.

"You have to give back," he says. "I knew I wanted to do something for the university's ethnomusicology program, but wasn't quite sure what. We've had short residencies of visiting colleagues for a week on limited funds, and I thought, what if we had an endowment? We could get someone to visit longer, to be a scholar in residence. In Hawai'i, it's hard for our students to come into contact with international scholars in the field because of the expense. And when these experts come here, they bring a different perspective of the field for our students."

Trimillos met with Michael Coppes, director of estate and gift planning for the University of Hawai'i Foundation.

"We went for coffee and sat around and talked about the plan," he says, "not getting into the finances at first, but different ways I might establish this endowment, so that every two years, an international scholar could visit for a whole semester, to enrich the study of world music at UH and to encourage the study of Asian and Pacific music and expressive culture."

Working with his personal financial advisor and with the University of Hawai'i Foundation, Trimillos established the Trimillos Visiting Distinguished Professorship in Ethnomusicology. He will add a second gift with life insurance after his death. "This plan was attractive because I thought I would have to find all the money up front, but part is being funded by my insurance," he explains. "It's nice to have financial advisors who are supportive of universities and are looking for creative ways to give to the community."

"All of Southeast Asia is about performance," says Trimillos, "where music is an integral part of the political landscape. In America, we think of the performing arts as extra and ephemeral, but in other parts of the world, music is part of the critique from the ground level toward the state. Also cultures like the Philippines use music and dance as cultural diplomacy." UHM students will now have an increased opportunity to hear these voices-from Asia, the Pacific, and Europe-to experience the cultural diplomacy and engage the critique, as well-known scholars in the field bring their expertise to Mānoa. "Music is part of the global culturescape,"explains Trimillos, "and we can hear voices emerging from cultures that go back centuries."