Channeling a Passion for Athletics

Two lines of wide-eyed elementary school-aged children and their parents appear at courtside from the locker room tunnel with signs, ready to shout encouragement and offer high fives. Soon, the Rainbow Warriors emerge from the locker room, huddle, and run out onto the court from the tunnel, doing high and low fives with the cheering children and parents. As the team takes its warm-ups, David and Elsie Shimokawa, along with other volunteer boosters, escort the excited youth basketball teams and their families back off the court and to the stairs leading to their section of seats, where they'll watch the 'Bows compete against another rival. It's one more game and one more Tunnel Experience for the young basketball fans and their families, thrilled to be part of the pre-game action in Mānoa.

UH alumni David and Elsie are longtime season ticket holders for basketball, baseball, and football, and have worked to provide The Game & Tunnel Experience to youth teams, schools, clubs, groups, families and eager fans of UH men's basketball. The idea for the Tunnel Experience began shortly after former head coach Bob Nash asked for help getting more fans to attend UH games. David used his work experience and background as a community basketball league director while his son served as ballboy under then head coach Riley Wallace and offered the idea of the Tunnel Experience. 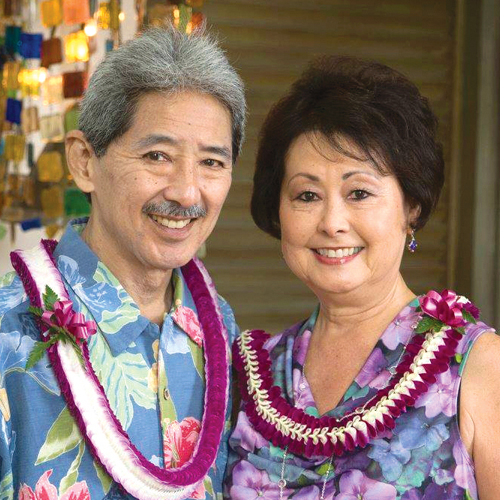 A dedicated group of basketball club volunteers and helpers, many who are also UH alums - Mike and Val Ishii, Glen and Sandi Takishita, Eunice Won, Dave and Melissa Tamura, Al Won, Ralph Goto, Sylvia Kruse, and Wally Izumigawa - have been with David and Elsie for many years from the very beginning doing the Tunnels. The late Howard Kruse and the late Jack Aaron were also there from the start and were at nearly every game to help with the Tunnel. Karen Hara, Stacie Hara, and Kerwin Stenstrom recently joined the Tunnel Crew.

"The goal is to have the Tunnel participants feel like they are part of the team," David says, "and not just fans way up in the stands. It is memorable for the participants because being there on the court floor in an actual game environment is very different from sitting in seats away from the court. And I just want to see them all happy, appreciating the game, supporting the University of Hawai'i, and being part of the basketball 'ohana. Prior to the Tunnel Experience, the opportunity to be on the court floor was limited. Now, with the new protocols established with UHM, it's more open: sign up early or make advance group reservations; meet the pre-requisites; enter the arena with your game ticket and, if you sign up on game day with space usually available, we can get you down there. But sometimes we are already at capacity weeks before a game."

Elsie also serves the team in a different way, working with other boosters to provide post-game meals for the team. "This year," she says, "we provided meals after nearly every home game thanks to support and generous donations from loyal boosters. And we also provided support for the basketball team's summer sports conditioning program. We had fun meeting new players and introducing them to our local food favorites."

The couple donated proceeds from a property sale to the UH Foundation in a charitable remainder trust for two sports scholarship endowments, granting them considerable tax benefits while providing them with monthly retirement income benefits. The rental property they donated would have faced a potentially large capital gain tax and required constant attention with little net income after expenses. Now, their generosity helps the university and gives Elsie and David more time for themselves. David says, "It was a good time to give back to the university while continuing to enjoy every game as season ticket-holders."

"You know," says Elsie, "when I was a student, I was focused on studies, working part-time jobs to pay my tuition, and never had the time or money to go to games. Now, we have time to attend games and participate in activities with the booster clubs, UH Foundation and Alumni Association. We feel closer to the university now than ever before, and we are proud to give back to the university by supporting our student-athletes."