"The scholarship is as much for the memory of my father and his career as my acceptance of its major role in shaping my own values, life and career," said Marian Okada, founder of the Howard S. Okada Endowed Scholarship at UH Mānoa ROTC. "Meeting many of his veteran friends and attending military related events, I came to appreciate what he considered important: honor, duty, loyalty and patriotism." 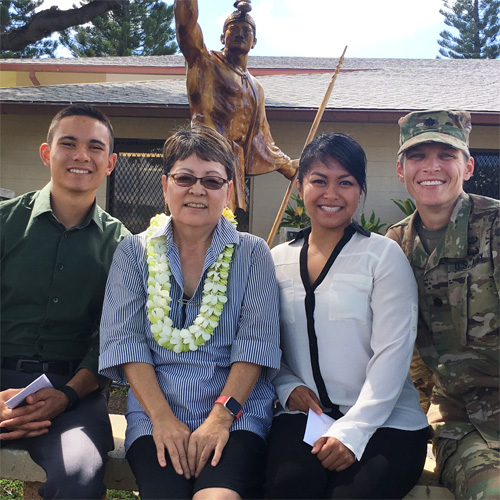 Chief Warrant Officer Howard S. Okada loved the army. He expressed this love for its mission and for his fellow veterans through consummate army professionalism as an administrative assistant and protocol officer with exceptional organizational and Japanese language skills. Marian J. Okada established the scholarship in his honor, to support students enrolled in UHM's Army ROTC program.

Howard was born in 1928 in Watsonville, California. Following the outbreak of World War II, in October 1942 his family was incarcerated at the Jerome War Relocation Center in Arkansas, where they were held until June 1945, when the camp was finally closed. The Okadas returned to their home in Fresno, California shortly after.

With the onset of the Korean conflict, Okada was drafted into the United States Army. More than 30 years on active duty took him around the world and through two wars until they led him to Hawai'i, where he was Executive Director of the Hawai'i Army Museum Society. He died on Memorial Day in 2016, after honoring his fallen brothers in arms alongside fellow surviving veterans.

Marian J. Okada, a federal employee who retired as a Japanese linguist with the United States Army in Japan, resides in Hawai'i, where she remembers her father's lifetime of service through her scholarship, which assists selected Army ROTC cadets at UH to pursue studies in Far East Asian languages and culture. The scholarship helps cover the cost of attendance for these future servicemen and servicewomen.

"I was pleased to meet the ROTC recipients of my father's award. I felt as if I was meeting the younger version of my father: they are achievers, as my father was. He would be very pleased with them."