Lenora M. Cho established a charitable remainder trust with highly appreciated stock. The trust will pay her income for life, and give her a generous tax deduction in the year of her gift. She also owed no capital gains tax upon the transfer or sale of the securities by the charitable remainder trust. When the trust terminates at Mrs. Cho's passing, the remainder of the trust will establish the David and Lenora M. Cho Endowment, which will provide undergraduate scholarships at UH Manoa to graduates of Konawaena High School, and financial assistance to UH graduates pursuing degrees in medicine at the John A. Burns School of Medicine. Mrs. Cho explains in her own words what inspired her to designate her trust to these purposes.

"David remained interested in Konawaena High School and attended the get-togethers they had each year. He would get information from fellow graduates and wondered how such a poor area could afford to send a child to college. Perhaps now help is on the way. It seems the right thing to do if a few good students can follow their dreams." - Lenora M. Cho 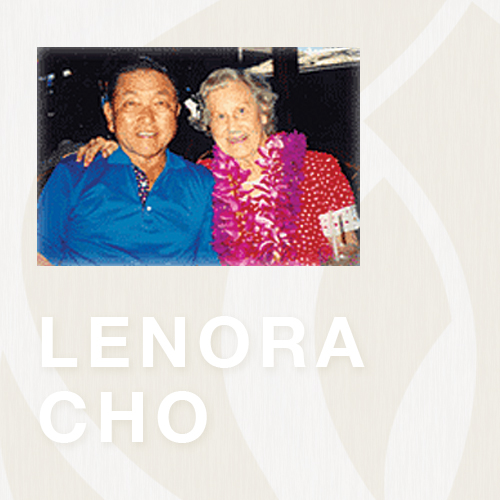 Lenora: My late husband, David Cho, was born in Holualoa, Kona, on December 1, 1923. After graduation from Konawaena High school, he enlisted in the U.S. Army in June 1942. He served on the mainland, and in Europe, Korea and Vietnam. His return orders in 1953 placed him as Recruiting Officer for Hawaii.

I, Lenora Mills Cho, was born in Blasdell, New York on August 20, 1917. After graduation from Blasdell High School my goal was Commercial Art; however, World War II changed my plans. After working in a defense plant, I enlisted in the military service in 1943. My assignment as an intelligence analyst ended in 1953 when I was assigned to Hawaii as Recruiter for females. I loved Hawaii at first glance and decided I wanted to stay here forever.

David and I were compatible from the beginning and worked together to improve enlistments. In 1954 David started the "First All Hawaii Company"; enlisting men from all islands to join together in Honolulu to take the oath and then go to basic training at Fort Lewis, Washington. This program was so successful that an "All Hawaii Company" was formed each year through 1961.

In 1960 my tour was up in Hawaii and I was assigned to Fort Jay, Governors Island, New York. Marriage had not been discussed but as I was ready to leave David informed me he would accompany the All Hawaii Company to Fort Lewis and then come to Governors Island to get married. What a shock, but I said ok, so he came and we were married August 2, 1960 in the military chapel. I was discharged from the Army in 1960 and came back to Honolulu where David was waiting for me.

David retired June 30, 1963 and immediately took up golf. He was an excellent golfer and had seven Hole-in-One trophies which made him proud of this accomplishment. He golfed while I worked at Fort Shafter Intelligence Office as an Intelligence Analyst until retirement in 1974. My hobby was hula, and the group performed at nursing homes, hospitals, hotels and private parties. David never missed a show and bragged to others that his "hula gal" wife was the best dancer and he was so proud of me. What a compliment!

David remained interested in Konawaena High School and attended the get-togethers they had each year. He would get information from fellow graduates and wondered how such a poor area could afford to send a child to college. Perhaps now help is on the way. It seems the right thing to do if a few good students can follow their dreams.

The medical field interested David, and I believe he would have been a doctor if given the chance. His patriotism won out, and he decided to make the military his career, but he continued to read medical books and was deeply involved in my medical problems. He would be happy to know he is helping a medical student become a doctor in the beautiful new John A. Burns School of Medicine.

David never talked about Korea, or the many awards he received, but I always knew he was special, and we had a happy marriage that ended just a few days short of 44 years. He passed away July 16, 2004, and rests at the Columbarium in Punchbowl National Cemetery.